This blog is about Stephen Fry. If you don’t like Stephen Fry you have come to the wrong place. Oh – and you’re a loser.

Give me an S

Stephen Fry: a modern day Oscar Wilde who has nothing to declare but his genius and aversion to dancing; a highly likeable man generously dispensing wisdom and humour; a manic depressive who has done all he can to reduce the stigma of mental illness; a corruscatingly brilliant comedian who has enriched our lives across four decades with his sketch writing (the ground-breaking ‘A Bit of Fry and Laurie’ inspired my own home-made comedy tape, ‘A Bit of Matt and Wordy’, made with my friend, er, Matt). On top of that he’s a columnist (apparently Robert Webb clung to ‘Paperweight’, Fry’s collection of Independent columns, like a yum-yum blanket. I too thinks it’s stellar), novelist (I’ve just started ‘The Liar’ nearly twenty years after buying it) and autobiographer (every sentence of the affecting ‘Moab is my Washpot’ is a joy). 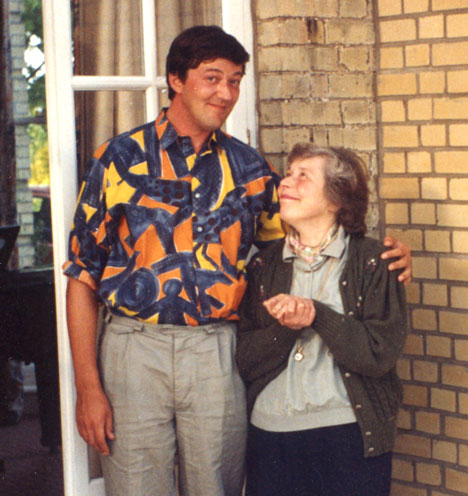 (Stephen at home with his mother next year)

What a man for all seasons, polymath, cottage industry and above all, giver Mr Fry is. It’s the liberality with his talent that so impresses. I am sure all generations have their own Misters Stephen Fry (Noel Coward, Peter Ustinov, Jonathan Miller, Adrian Chiles). I’d be surprised, though, if many/any brought us quite so much and with such good grace and affability. We are blessed indeed to coincide with a being of such pulsating talent and generosity of spirit on this tiny planet we call erf.

In short I think he’s ace. Hell, I even wrote a column about him for the Metro.

Yet just when I thought he didn’t have time for anything else (and it seems clear to me that MSF has devised a proton-dividing wotsit that doubles the hours in the day either that or he doesn’t sleep much in fact I know he doesn’t he’s an insomniac), I stumbled upon a video that surpassed my expectations.

So here goes: Stephen Fry on how to live: