On hurling faeces inside a non-functioning windmill

Blimey, it’s been over two months since The Last Post. That’s why I’m determined to write this before June rolls around (she said she’d be here by 8). You’re lucky to be reading this, actually – I almost didn’t survive today. You see I slipped on a banana skin. Proper sliding-down-the-road stuff it was. OK, I didn’t fall flat on my b-hind or anything but I did do the banana splits.

Last week I stayed in a windmill in Ringstead, near the north Norfolk coastal town of Hunstanton. A converted six storey towermill built in the 1850s, ‘the mill’ belongs to relatives on my mother’s side, having been bought from the conveniently-named poets Francis and Frances Cornford in 1956.

Oh look, here it is! 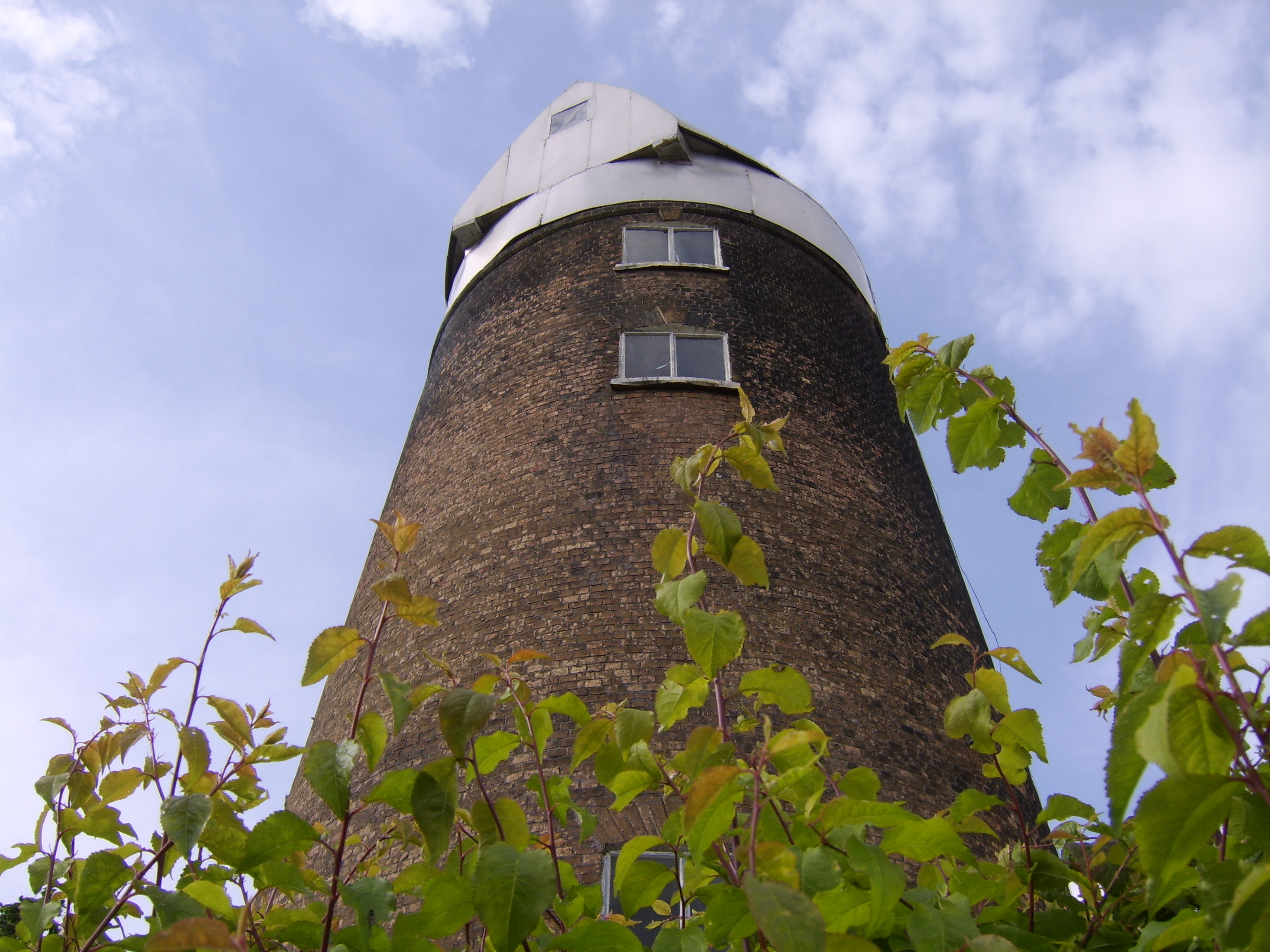 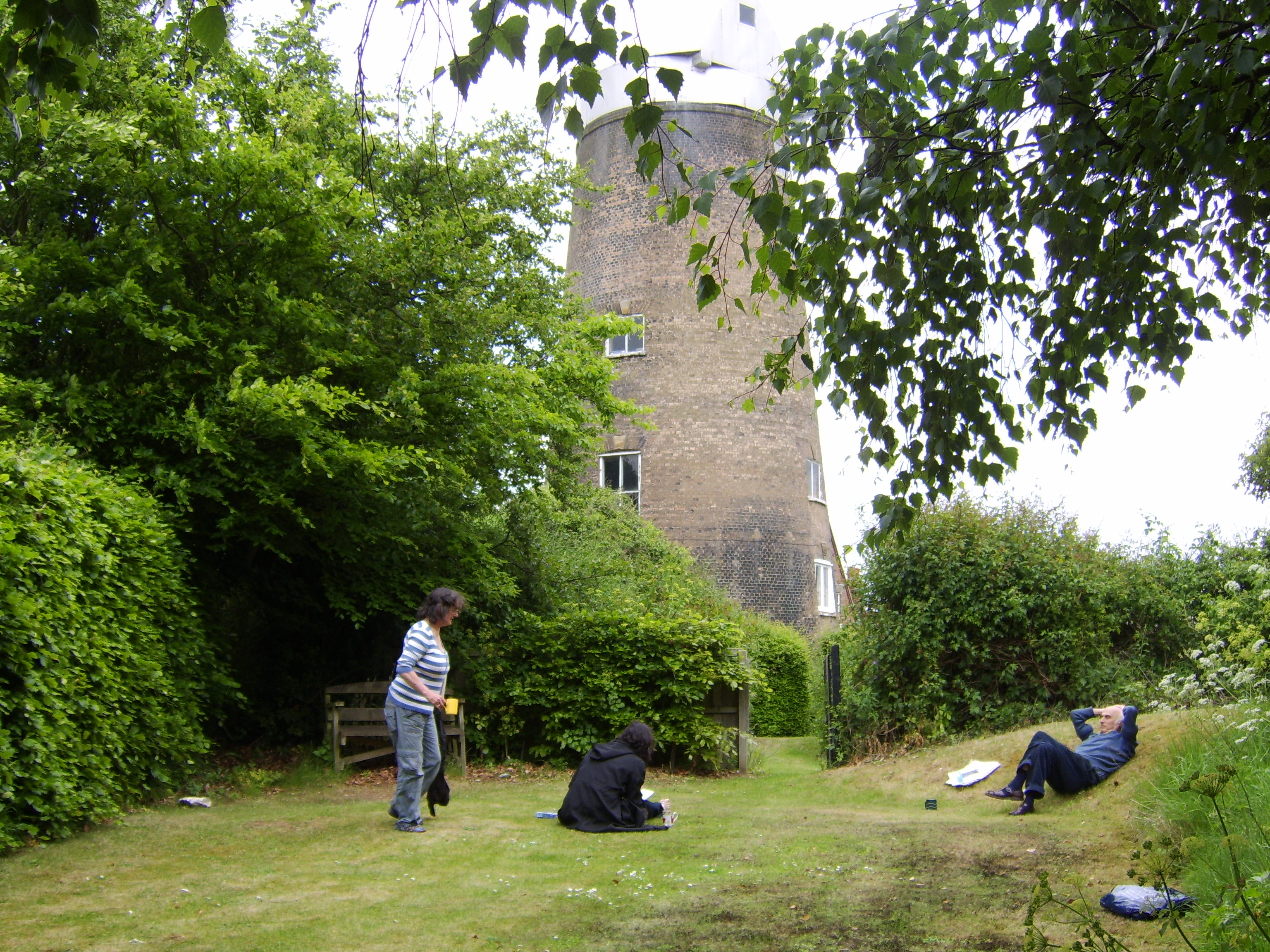 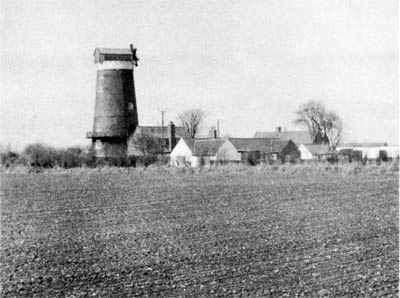 (for those of you keen to learn more about the dubious title of this blog – an anecdote that is perhaps one of the most oft-recounted tales in my family – please be patient, it’s coming soon. As a girl I went to university with once said to me after failing to succumb to my charms, “all good things to he who waits”. You know who you are, er, Rebecca).

The whole holiday started in rather exciting fashion. Ten minutes after setting off I received a call from the Guardian newspaper informing me that they wanted to publish an essay I had written about my father. I was so pleased and surprised, I nearly crashed the car!

(that’s artistic license: If anything, I probably swerved imperceptibly swerve. Or carried on as normal)

I arrived and met my cousin Bridget, her fiancee Danny and their son Louis, shortly to be followed by scientist, humourist and Larry David lookalike, my Uncle Myer (UM), plus whirling dervish of energy, Aunt Catherine (AC). Here’s a pic of all of them, save for Myer. 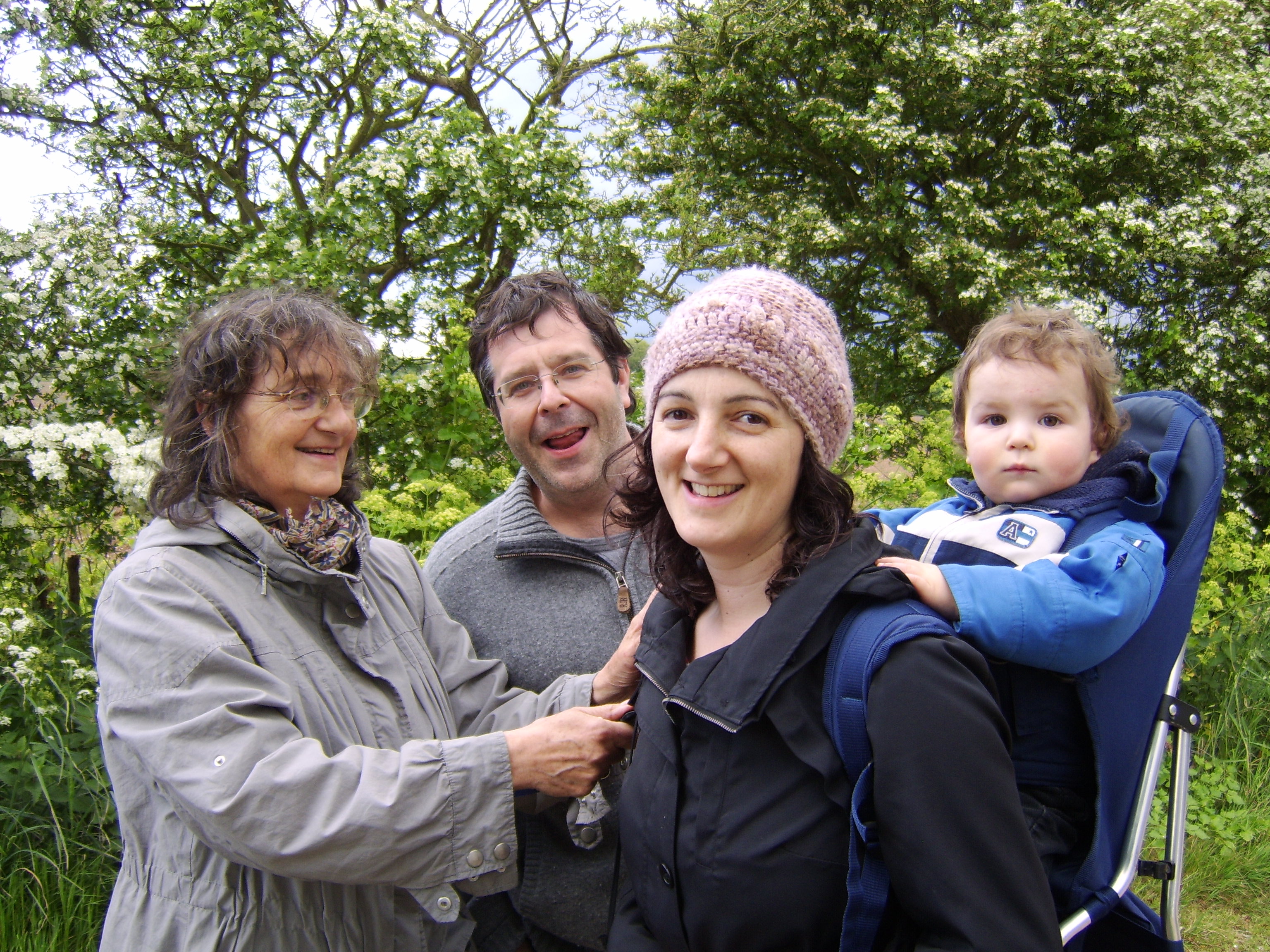 The Mill is a place of mystery, history, memories and dung. Has there ever been a better location from which to drop Action Men out of high windows? I doubt it. I visited so often as a child that I got to know one of the ruffians from the row of nearby houses. We’d hurtle around on our bikes, piss against trees and talk about The Incredible Hulk. This rural ragamuffin told me my windmill was haunted. I can still picture my great aunt Esther, a Russian lady of considerable scientific and literary distinction who worked for many years with Albert Einstein, sitting me down and explaining in her impressive accent that there were no such things as ghosts. Me and the ragmuffin didn’t speak after that. I wonder what became of him. If you know, please write in. Actually, I don’t care. He is dead to me.

Before we go on, here’s a cute one of watchful mum Bri in the kitchen with li’l Louis. 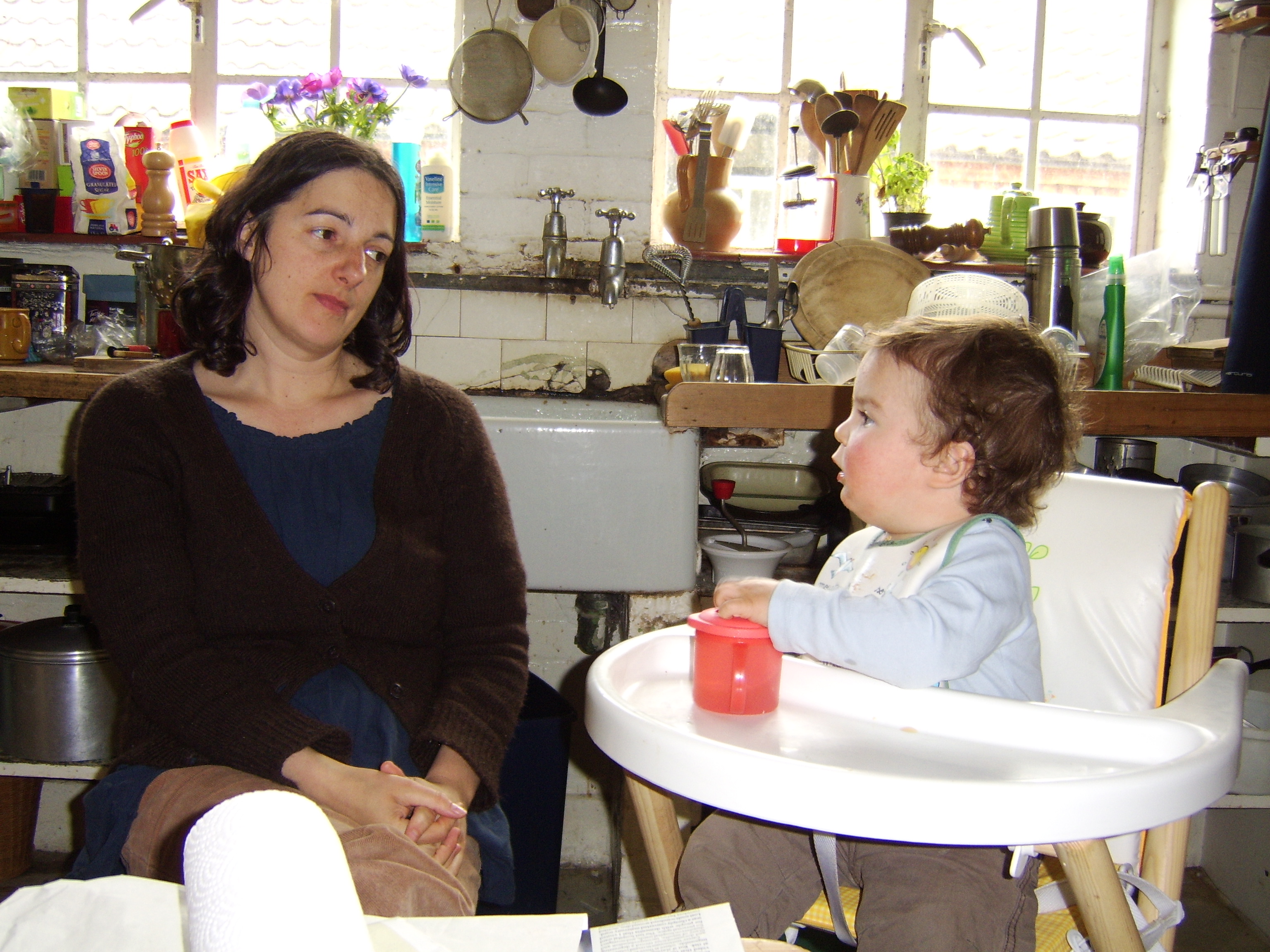 “I was a nervous boy, no strength no joy…”

As a child, whilst an assortment of adults and children ventured up the stairs to the sixth and final level for a deco, I was too scared to do so on account of being scared of absolutely everything. Instead I remained in the huge sitting room playing the piano or the organ, or counting my legs.

Essentially the ground, first and second floors are habitable. From there it grows increasingly grim, populated as it is by dead flies, broken chairs, austere-looking camp beds and escape harnesses that were installed by my grandfather Raphael some thirty years ago and are probably now a death trap. 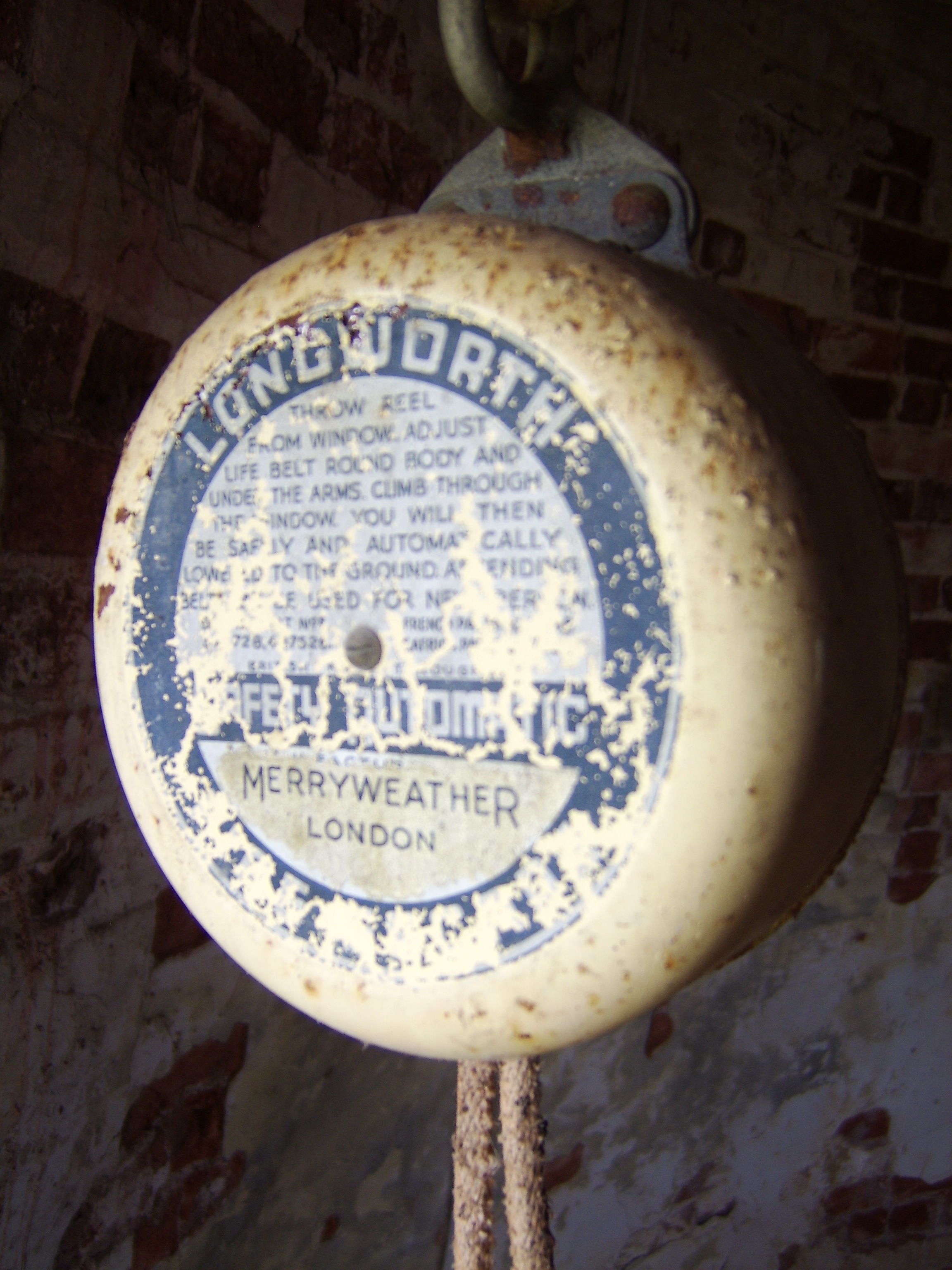 During WWII Raph, a cautious man by nature, was the principal fire warden for Marks and Spencer and his anxiety about fire was one he took home with him. He insisted that we install a harness in my dad’s study back in Harpenden. Since the drop was only about three metres I’m sure we would have been better off jumping rather than getting strangled to death in a harness. That said, considering how much my dad smoked and his proclivity for falling asleep at the drop of a book, I know he had our best interests at heart.

Having only visited once in the last 18 years I decided that this time I would make the trek to the top, armed only with a camera and my uncle Myer in my back pocket.

I had run out of anti-hystamines on the second day. By the third, I was simply a receptacle for mucus. The mill is so damp and dusty it’s little wonder not even the flies can hack it for long. In places, the mere touch of a wall brings forth a torrent of tumbling powdered plaster. Still, up we went… 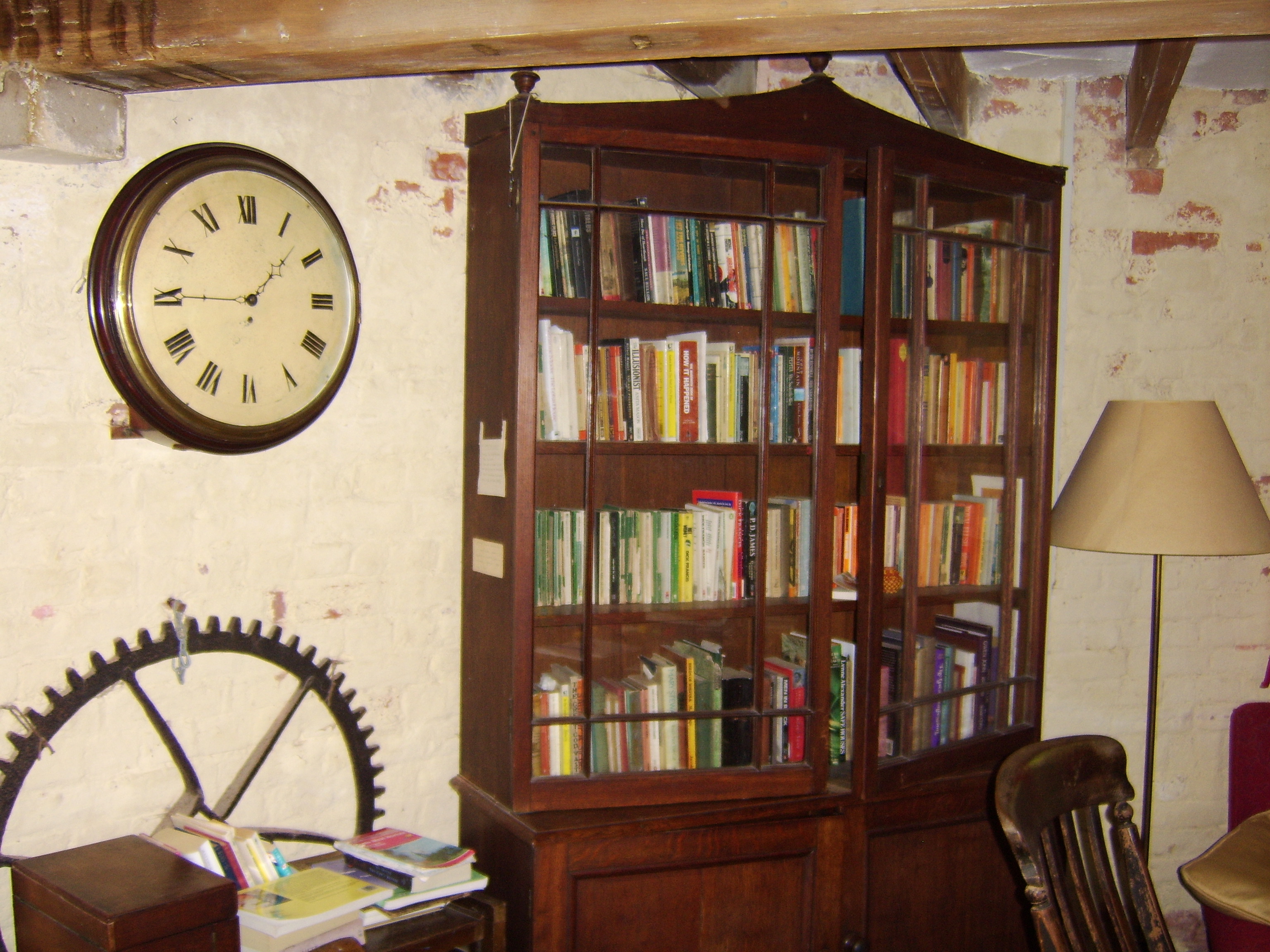 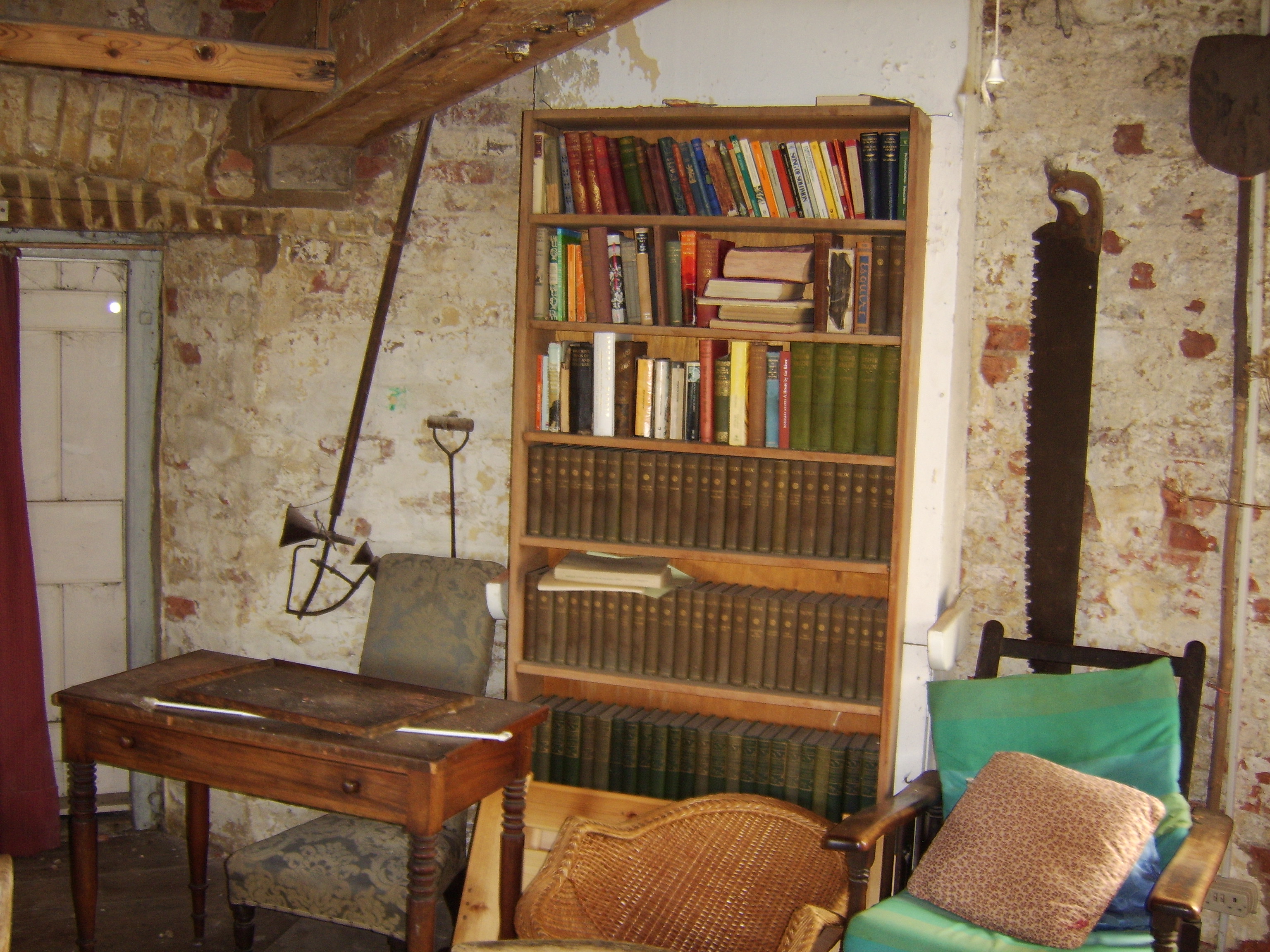 …Myer looking circumspect on the third… 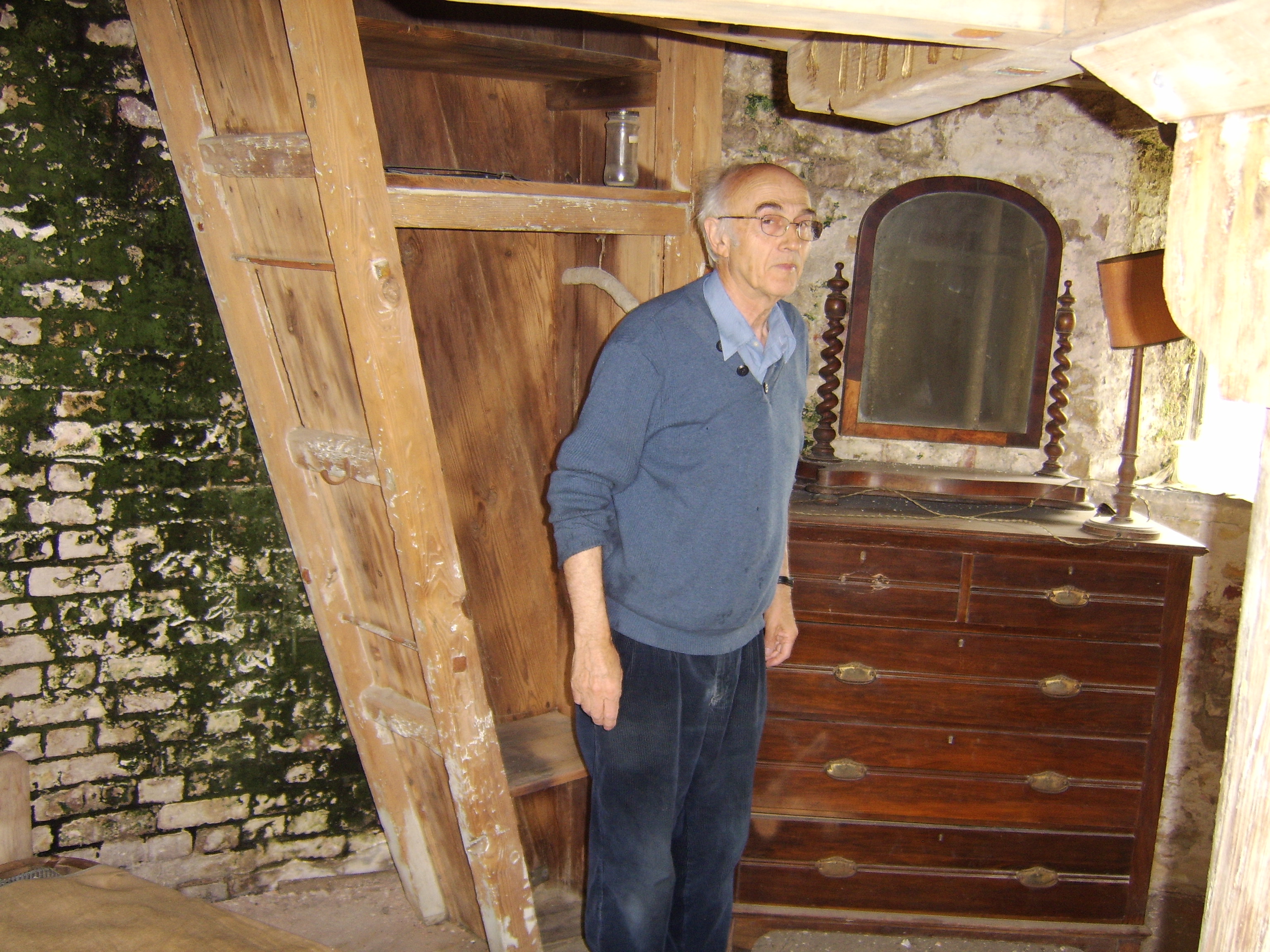 …next to the beds of death… 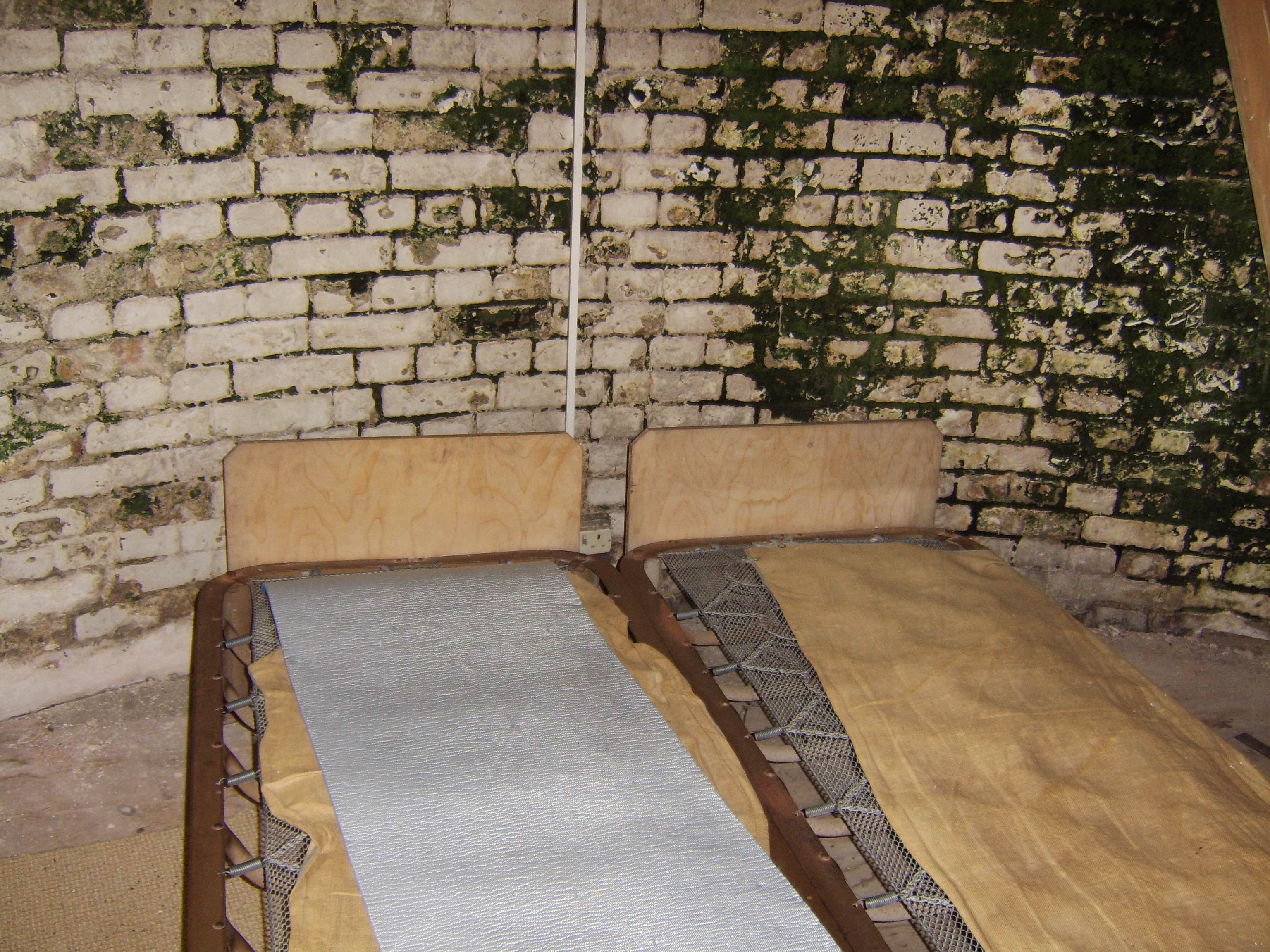 …uncle Myer about to cross the threshold into the very top (sixth) level. 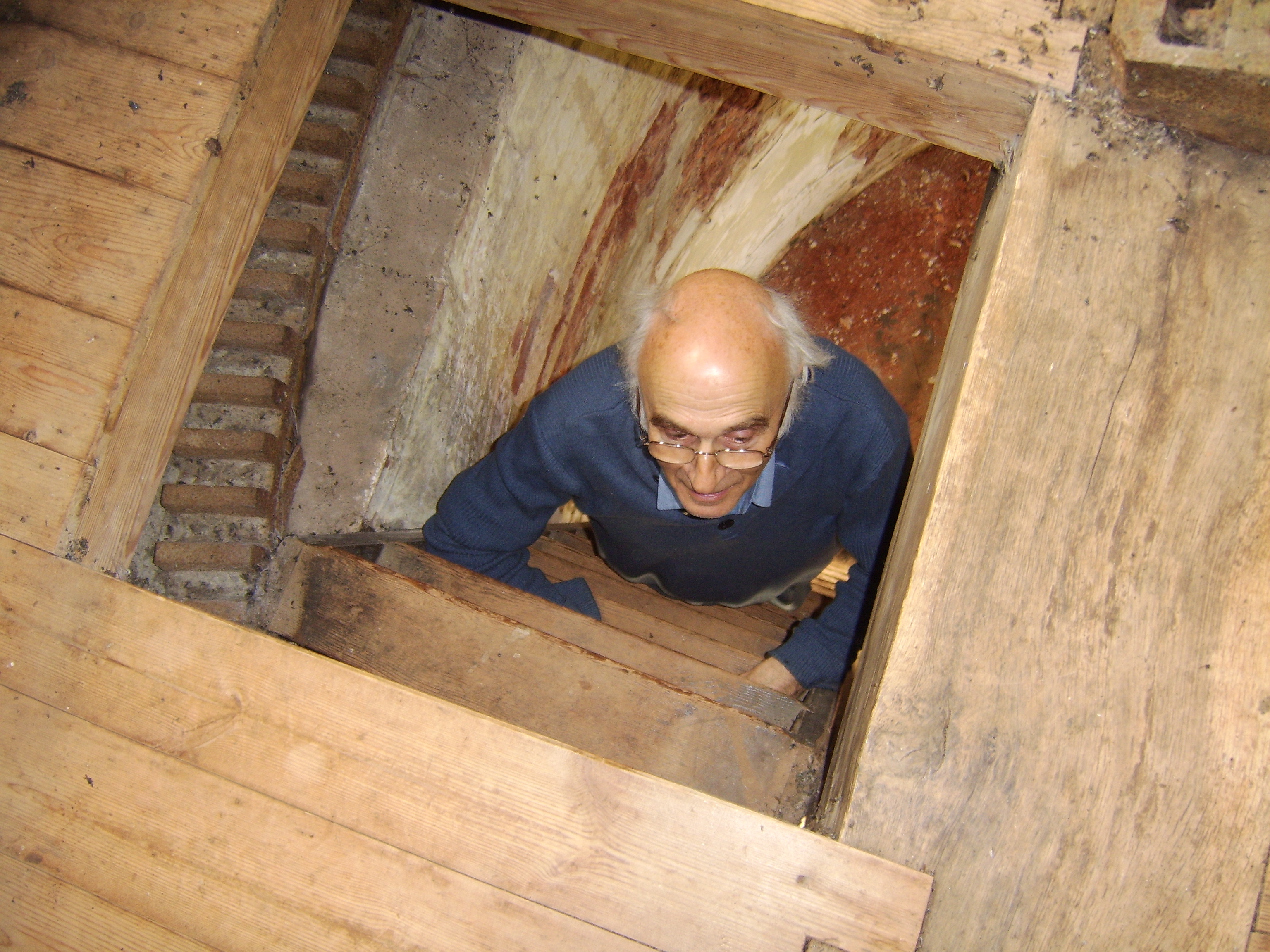 There’s even graffiti up there. 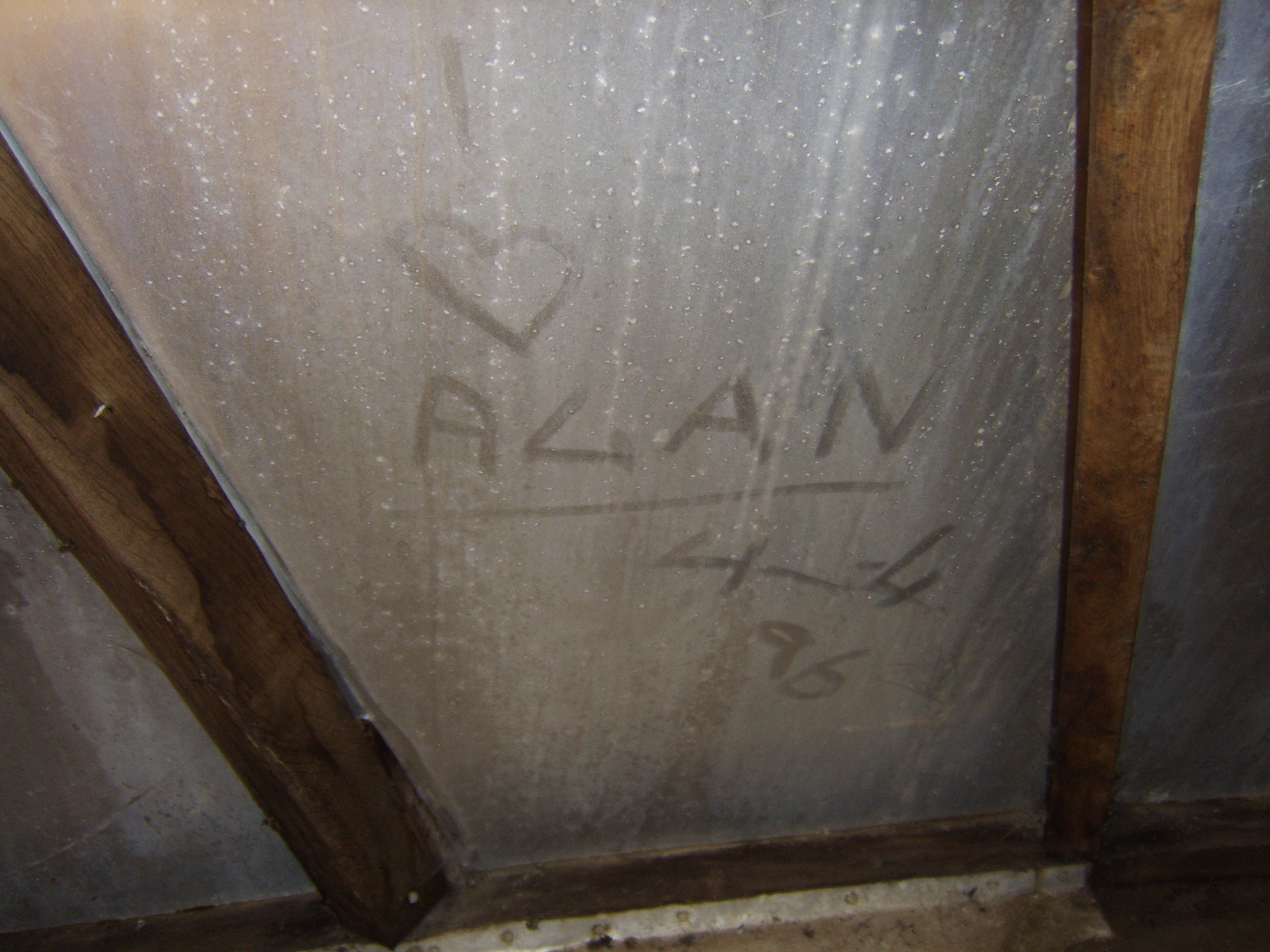 So there you go. I made it. It was interesting enough but there wasn’t that much to see (unless you’re into big cogs), and I experienced no great sense of achievement. Still, at least I get to tell my story now.

Back in 1980 I was staying at the mill with my parents, plus uncle Myer (him again), aunt Catherine and their children – the aforephotographed Bridget and her troublesome brothers, Malcolm and Luke. I was sharing a room with Mal. Creepy room it was. There is a small house next to the mill and our bedroom overlooked it. I’d been told, perhaps by the naughty local sort, that there had been a murder in this house (I was very suggestible at this age). As we lay in our respective beds trying to sleep this may or may not have contributed to the fact that a tiny pebble of poo, no bigger than an M&M, quietly emerged my seven year old bottom. I can almost feel it now, all smooth, warm and reassuring. Panicked and a long way from the bathroom I decided that, based on the options available to me, I would hurl said pellet of plop as far away from me as possible. The only problem was I was lying on my left side. As a left-hander my right hand was as good as useless to me. It was pitch black. My right arm came out from under the covers. I flung dung. It landed on my cousin’s pillow. He rolled over. Oh no! He had sh*t on his face! He went downstairs and to tell the adults. “Saul threw a poo at me!” he said. I can’t really remember the rest.

There’s not much more to add, save that Malcolm and Luke like to mention the incident as often as possible, ideally with strangers present. 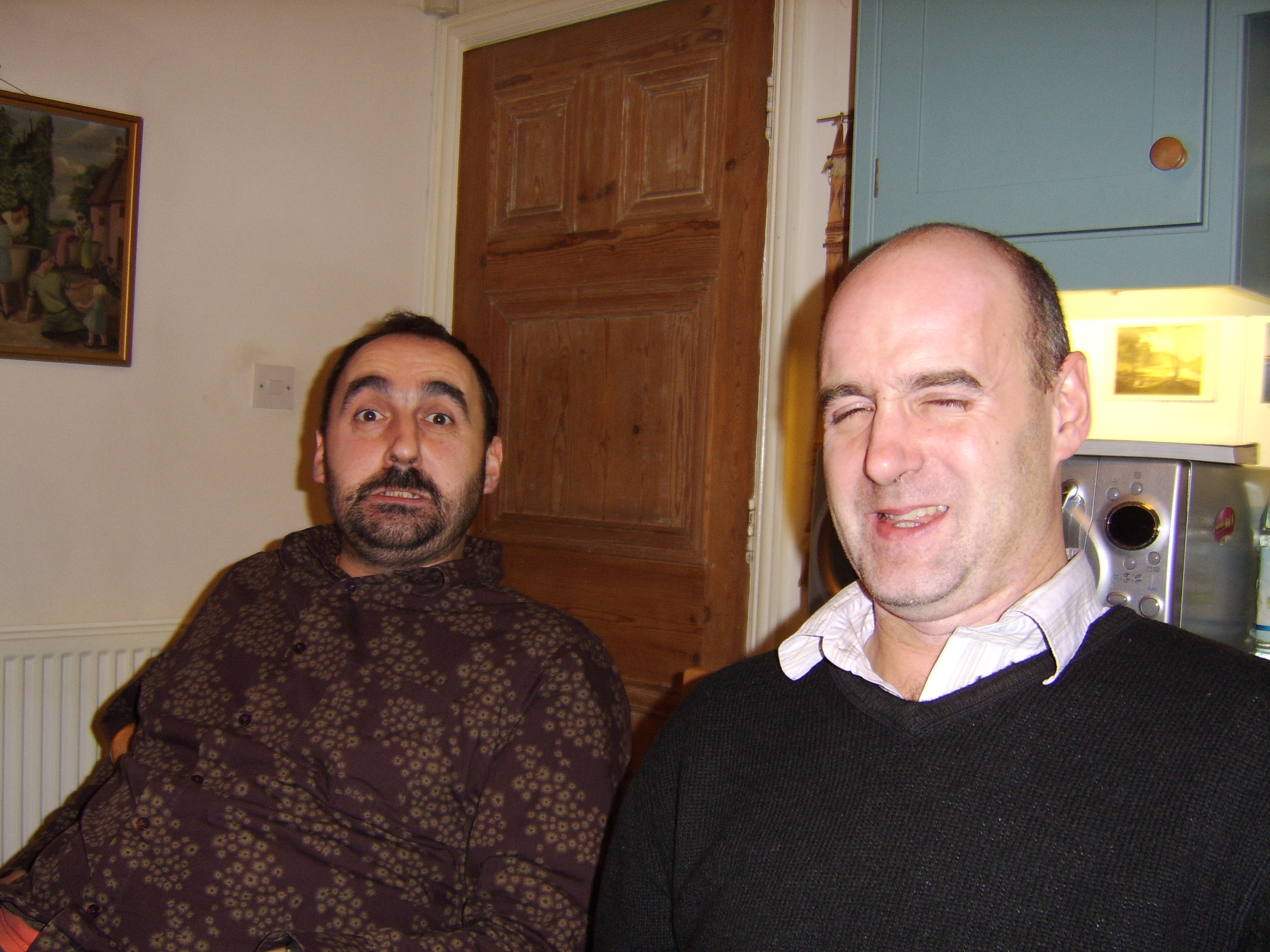 Not finished your tea yet, Myer?

This blog is dedicate to Poppy, a lovable little doglet I met last weekend.