Every person who rides a bike will tell you tales of sufferance. To ride is to suffer. That is the beauty and the glory of cycling. You suffer, and you keep going. As the tempo rises and the road rears up you die a thousand deaths but you hold on – and afterwards exchange war stories over coffee and cake. These are joyous affairs, particularly when I’m not paying. Why? Because the suffering has abated, at least for another day.

This year I secured a place for RideLondon 2015, but relative disaster stuck in the days before when I came down with a virus. My pal Philip was shocked by my appearance. I in turn was shocked by his (that panama was a massive misjudgement). Overall it didn’t bode well for the Sunday.

I was granted the early departure time of 6:03. This meant starting with the fast riders: the semi-pros, the racers, the ultra-serious. I just about sneak into that category.

RideLondon is an incredible, closed road event. You hurtle through the streets of London then head out into the Surrey hills before galloping back into town. Early start. 100 miles. Home by elevenses if you’re super-quick.

We set off just after 6am. Departing this early meant a bat-out-of-hell tempo. At times the speeds were frightening. I clocked Harrods but it was gone in a flash. We swept through Richmond Park at breakneck pace. After 35 miles we were out in Surrey where things start to get lumpy. There was one lump in particular where the riders in front of me became detached from the main group, so I did too.

Whether it was the high tempo or the remnants of illness I can’t be sure, but I was starting to struggle in a major way. At Newlands Corner we hit the first of three recognised climbs. I was empty. I dribbled up it like an elderly aunt.

After more ups and downs the second categorised climb was upon us. Leith Hill, tough and renowned, at least for the south-east. Another dribble. My lower back had gone into spasm. I was fatiguing badly. I cannot stress enough the agonies of the moment. I badly wanted to climb off. That wasn’t going to happen, but it was an inevitable message my body was sending my brain.

It was then a desire came to me unbidden which had never visited me before. I began willing a car to appear out of nowhere and knock me off. “A car,” I thought. “Or a tractor. Even a UFO. Anything to spare me this torment. Thanks.”

Clearly I was suffering in a manner that was new to me.

Box Hill was the last official climb, the same Box Hill that featured in the 2012 Olympic road race (although the professionals ascend it nine times). Again I felt empty but I attached myself to a rider from London Dynamos and somehow made it to the top.

Here’s a photograph from Box Hill. It’s an unofficial screengrab (I didn’t fancy forking out for a shot of me wimpering on a hillside). You may observe that unlike the rider in front I am struggling to hold what may be termed ‘good form’ (trans: I’m jiggered). 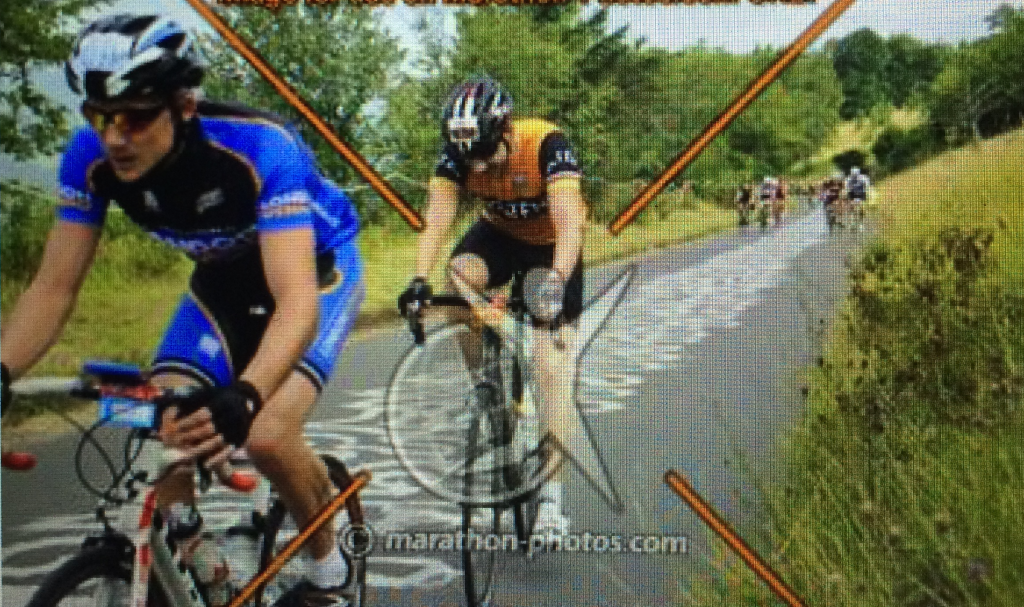 Once at the summit I noticed that a group had assembled 40 yards in front. I attempted to bridge the gap, literally begging a higher power to allow me reach them. This was getting biblical. It took a minute of panting and pleading but eventually I made it. Once there the physics of slipstreaming eased my passage. Thus began the 25 mile run-in back to London.

I continued to struggle with my back and fantasised about being incapacitated by a low-flying plane or yeti. It brought to mind a story Chris Boardman tells of counting down a Tour de France climb in increments of ten metres. I too was using techniques to break down the ride. Without a bike computer I asked fellow riders how far to go. From this I would deduce time left and calculate accordingly.

We reached Wimbledon Village. I refound some strength and powered up the short incline. I attempted to stretch my back on the move, but with little success. Thankfully I continued to get dragged towards the finish by what had swelled into a mammoth group.

The end was nigh, but so was I. We turned left onto the mall. A sprint would have been in order but I had nothing. I crossed the line, collected my medal and checked my phone.

I sat down on the grass and ate some crisps, then struggled to get back up. My back had gone into full spasm. I blagged two ibuprofen from a fellow ride and was attended by the medical team, who fixed me enough to negate a call to Uber.

I had made it round in 4 hours and 16 minutes, 19 minutes behind the winner. That placed me 346th out of 25,000. The feeling of having passed through the torment made it all worthwhile.

I thought I knew what it meant to suffer on a bicycle. Turns out I had no idea. This was a new level of wretchedness, featuring a fucked back and fantasies about being flattened by a farm vehicle. Clearly I haven’t been pushing myself hard enough. Now I know how much I can suffer I want to do it again.

Maybe in a few weeks, anyway.

That evening a small group of us convened in the pub to compare notes on the day. Jason in particular seemed taken by the notion of, in his words, “when it hurts so much that not existing seems preferable to continuing.”

In cycling suffering is temporary and, if the stakes are high, worth bearing. Even when they’re not it’s undeniably good for the soul to push on through and emerge the other side. When we suffer in life it can be instructive. On occasion it may be almost too much to bear.

In neither case should we ever dismount.

There may be more seasoned riders than I who will scoff at this post. “MTFU,” they will say. MTFU is a cycling acronym that stands for Man The Fuck Up.