On being beaten up

Didn’t see you there.

Happy New Year! I hope 2012 brings you everything you ever dreamed of in terms of kitchen gadgetry.

I want to let you know about my recent experience of being beaten to death. 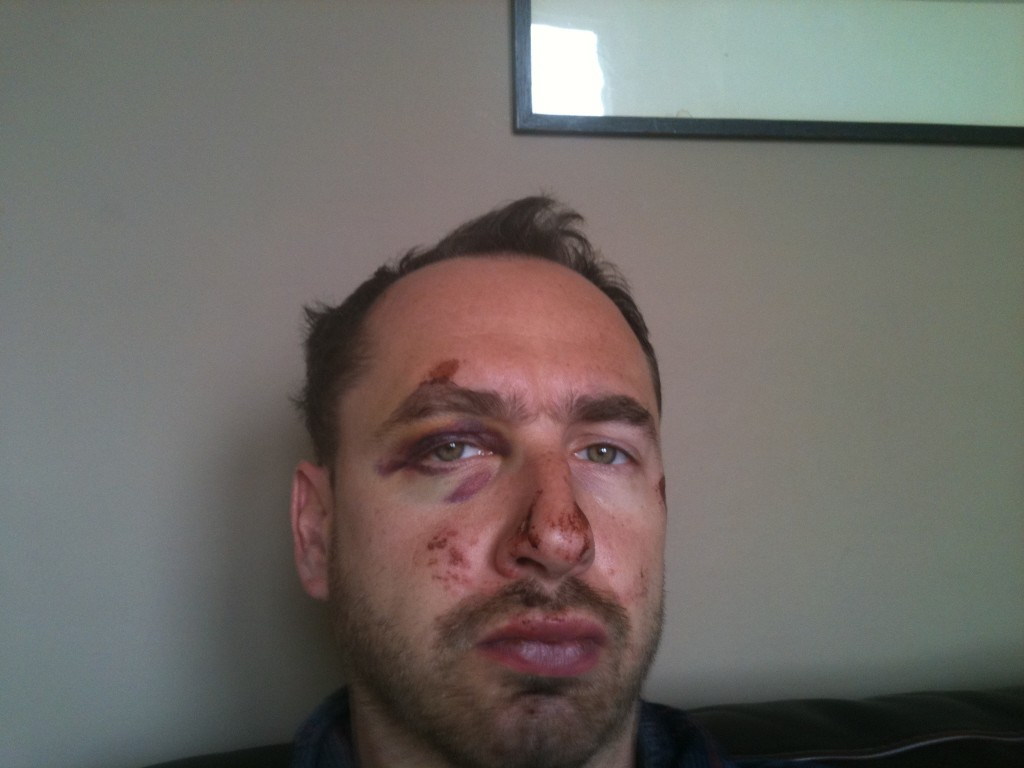 The image above is an example of what I would look like had I been beaten up. I haven’t been. That picture is from last year after I fell off my bike. I included it so you’d read on.

It’s a cheap trick I learnt from the tabloids. I’m really sorry but my Google Analytics have fallen away recently so I’m sure you can sympathise.

However I did come close – MIGHTY close – to be being brutally assaulted last Friday.

So near as damnit as to make no difference I’d say.

I was at Ye Olde Cheshire Cheese on Fleet Street, London, the world. This cavernous watering hole is a former stomping ground of Charles Dickens, William Wordsworth and TV’s Paul Daniels. It also serves cheap beer. For these reasons it is my spiritual home.

I had arranged to meet Naught Nick (NN) there. NN was late and the place was busy as I stumbled through its labyrinth of snugs, crannies and nooks in my quest for a seat. About to give up, I happened upon an attractive 30-something lady on a table built for four.

“Mind if I sit here?” I said to said lady. “My friend is coming soon.”

It was then I noticed a bulky overcoat on the bench opposite.

“Of course not,” she said beaming a beatific smile. “Let me move my husband’s coat and you can sit opposite us.”

I hadn’t planned for a husband but this didn’t really change anything in the short to medium to long term.

It was as I pondered this minor detail that an extremely enormous monster appeared out of nowhere, cradling a pint in its massive hand and wearing a face that could launch a thousand self-soiling episodes.

The monster didn’t say anything, it just stared.

Then it said something.

It was a northern monster of some kind.

“This gentleman needs a seat so I’m moving your things so you can sit next to me, darling.”

Again it didn’t say anything, it just stared.

Then it spoke again.

“YOU TELLING ME THERE AREN’T ANY OTHER SEATS ANYWHERE ELSE IN THIS WHOLE FOOKIN’ PLACE?”

This was directed at me – the staree – and was my first opportunity to participate in the discussion.

The 20 stone monster sat. Trembling, I did the same.

I was now staring at the married couple, in an upright bench, separated by an extremely shallow table. It felt unnecessarily intimate.

“MY WIFE AND ME ARE HAVING A ROMANTIC EVENING,” glared the monster, without blinking. It continued to stare at me. I focused on the vein beating a rhythm on its forehead. Its face was nearly touching mine. I have no idea why the lady chose to place me opposite. This was too weird.

“There’s really no need to,” said the fetching dame.

The monster’s expression didn’t change. It sipped its pint. Then once more it spoke.

“MY WIFE IS AN EXTREMELY ACCOMMODATING WOMAN.”

This, I must confess, set the cat amongst the pigeons. When a man – or a monster – uses the words “wife” and “accommodating” in the same sentence it usually means I am being called upon yet again to service the woman while the husband relaxes in a nearby armchair.

On this occasion I felt this was not the intended meaning.

“Too accommodating?” I inquired, seeking clarification while secretly hoping that I may still be required to make love to the nearby beauty.

I picked up my pint and rose (I mean I stood – that Friday I had no flowers with me). The lovely wife, with whom if things had turned out differently I could have been romancing somewhere sexy like the nether regions, was mouthing “sorry”. I thought I may have caught an additional “take me with you”, but didn’t dare look for too long in case I was murdered by the behemoth opposite.

“ENJOY YOUR EVENING,” it said, staring straight ahead.

“Likewise,” I said and traipsed off*

As I did so I muttered ‘shit-muncher’, believing the lumbering beast to be out of earshot.

This was a massive error

“WHAT DID YOU SAY?” bellowed the giant, rearing up to its full height and brushing the ceiling with its tiny hairs.

I spun round and was grasped by the throat.

“I said you’re a shit-muncher.”

The monster’s stare relayed in non-verbal form the fact that I was now close to death – but, dear reader, I was all of a sudden swept over by an inner calm, much like mustard gas.

“Where do you get off intimidating people out of their seats?” I said, boldly. “This is London. There isn’t much room. We have to share space. And why come to Ye Olde Cheshire Cheese for a romantic drink on a Friday night anyway? It’s a busy pub. Dickens used to drink here, you know? People flock from miles around to drink in the same pub Dickens drank in. You should have gone somewhere quieter, like The Feathers of Welwyn Garden City.”

There was a long pause. The monster raised its ugly fist as if to crush me with a single blow. I stood, unmoved, then slowly its arm slunk back down, all the way down, until it rested once more against its side. Its grip loosened around my neck.

“You’re right,” it said, mumbling, looking down. “I’ve forgotten my manners. It’s been so long since me and Debs have been out together I’ve placed far too much import by the occasion. I hope you don’t mind if I’m frank but I fear our marriage is on its last legs. I feel like this was our last chance to to connect in the way we used. You know what that’s like don’t you – when you meet someone and your whole world changes?”

I nodded sagely. The monster’s eyes were full of tears.

“I was entirely in the wrong,” it continued. “Please accept my sincerest apologies. Come join us.”

I ignored the monster’s use of American phraseology and paused to consider my response.

“That’s very kind,” I said, “but no. You are clearly in need of special times with your enchanting partner. Enjoy yourself without me. I wish you nothing but the best.”

The giant stuck a mammoth paw in its pocket.

“Here’s an Ayrton,” it said. “Go out and have yourself an incredible evening.”

“Keep it,” I retorted. “Buy something pretty for your unbelievably attractive wife.”

Dumbfounded, the monster slumped back down and wept into the arms of its extremely beautiful lover.

I went and sat on a wooden bench nearby and watched as the woman held the monster, caressing its horns. Two men walked over to their table. Shortly after I saw both men flying through the air before smashing into the wall behind me, sliding to the ground in a bloody heap. Only one was breathing.

* Asterisk denotes point beyond which story is untrue