Are you like me? I don’t mean handsome, debonair and unflinchingly honest about yourself. No, I mean are you one of life’s critics? Because in life, such as life is (I’m talking about ‘life’ here), people can generally be divided into two camps: glass half-full and the rest of us. The half-full mob leaves the theatre and says, “oh well, you have to say they gave it 100% out there Nelly,” whilst the rest of us, being of a particular bent, will venture, “What an appalling assembly of complete and utter bobbins. My pet hamster could have written that before he was even born.”

The word ‘critic’ comes from the Greek κριτικός meaning ‘give ’em hell’. Often seen hunting in packs, especially in wooded areas and Shaftesbury Avenue, critics live off their reputations – and cheese – and carry around with them poisoned pens that squirt deadly ink, destroying careers in a single phrase. They feed off misery and review anything that gets in their way: books, films, plays, telly, ballet, crisps, you name it.

Actually I’m being awfully critical of critics. Sorry critics wherever you are. You’re not all bad (I have to say this in case they come for me). But imagine what it’s like for an actor or writer when you challenge their very ‘raison d’être’ (that’s French for ‘new album’). My advice to all arty types out there is ignore reviews and be your own harshest critic. That’s what I am. Or at least I thought I was until I googled myself last night. 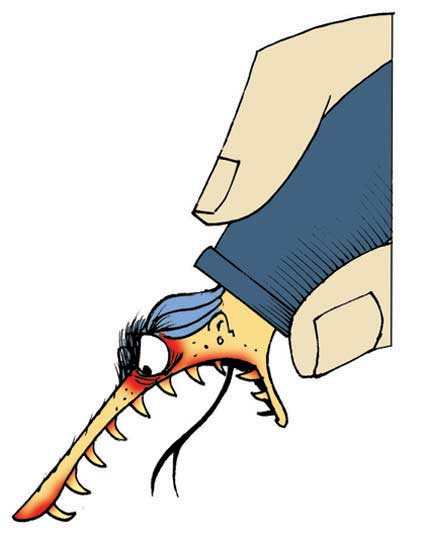